Events will be held with important guest speakers in pursuit of these objectives.

Activities will also be coordinated to push back against unjustified attacks on Israel, including the BDS movement and activities within other political parties.

Liberal Friends of Israel Victoria will be working cooperatively with our counterpart group in Sydney. 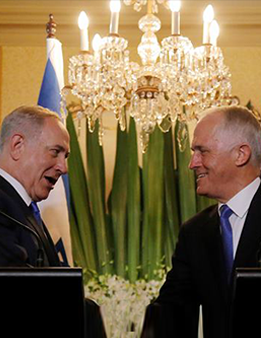 Prime Minister Netanyahu’s visit to Australia in February 2017 celebrated a century of close ties between Australia and Israel, dating back to the Light Horse Brigade’s service in the Battle of Beersheba, and General Sir John Monash’s leadership of the Australian Zionist movement.

In 1947 Australia was the first nation to vote at the United Nations for the partition plan which created a Jewish State, and began full diplomatic relations on 29 January 1949.

The Liberal led coalition government of Harold Holt supported Israel during and after the Six Day War, whilst the government of Malcolm Fraser reaffirmed Australia’s support for the peaceful existence of Israel, and committed Australian troops to the Sinai Peacekeeping Force.

As Prime Minister, John Howard said of Israel “good friends stick together even when it is unfashionable to do so”, and he and his government stood firm in their support of Israel at the height of the intifada when other countries turned their back.

This is the history we seek to continue. The Liberal Friends of Israel is proud to have worldwide support for our initiatives. Click here to view our messages of support.